Get Ready To Pivot

We are in the fourth and final mini reflation cycle of this 12-year bull market. Price signals across capital markets are suggesting we have reached an important juncture with significant implications for leadership in the share market.

Bond and key currency cross rates are in the process of reversing which will be a headwind for reflation sectors. Commodities have also lost upward momentum in recent weeks as traders have sensed the changes afoot.

In bond markets, it started a few weeks ago with the bunds, followed shortly thereafter by US treasuries and then the Australian 10-year all started to rally. 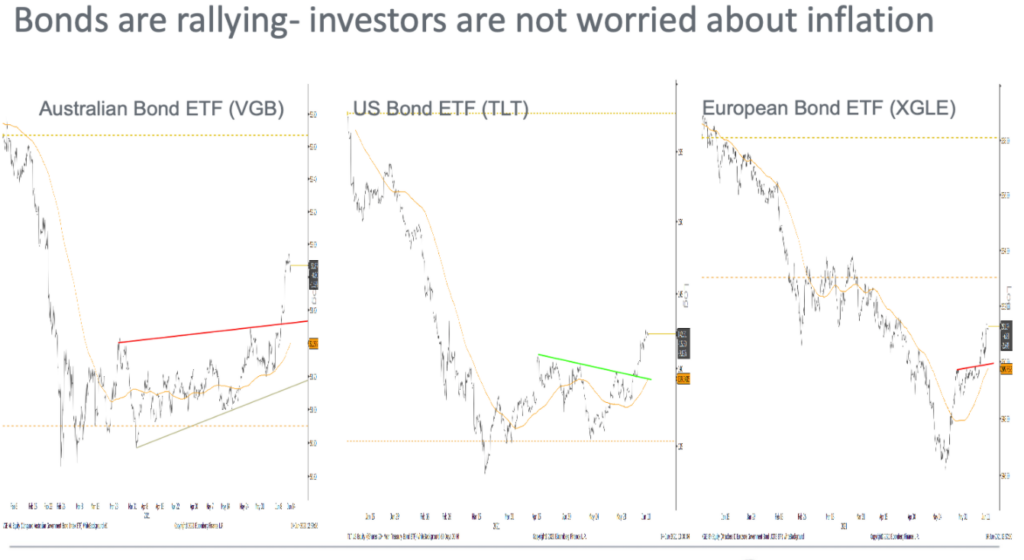 The fact that the bonds broke out days before the US CPI print was telling. The price action on the day of the release was equally telling- the bonds initially sold off before resuming their advance. It is clear which way the bonds want to go – up!

It seems investors have embraced the central bank narrative that inflation will be a temporary phenomenon. Bond markets have voted with their feet and are not worried about inflation.

Equally important is the reversal taking place in currency markets: The US dollar, which has been falling since the COVID peak last year, has held and retested recent lows and looks like it wants to rally also.

We have already seen breakouts in defensive cross rates (CHF.YEN) confirming this move. While the commodity currencies (AUD, NOK, SEK) are still hanging in there, they are likely to come under pressure in the weeks ahead. 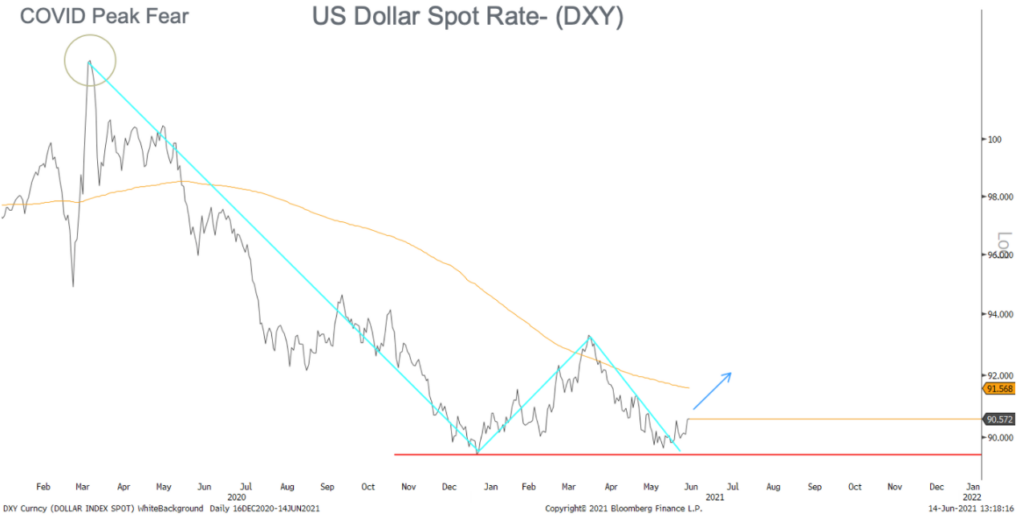 If you are wondering why the US dollar is going to start rallying, look at the above chart. As money supply growth normalises, the US dollar gets relief from the dilution for growth in M3.

The US dollar and money supply growth are closely correlated 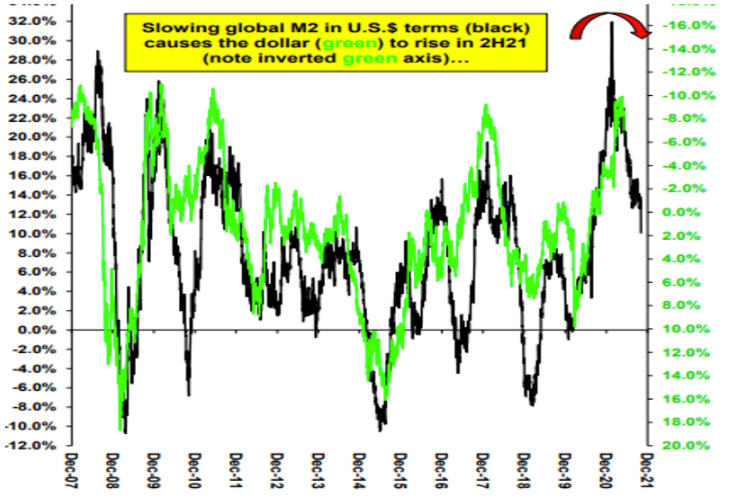 This correction, if it does happen will result in a transition in factor leadership away from cyclicals and value – banks, resources and domestic cyclical shares – in favour of defensive sectors that have underperformed in the last year. Examples of the latter include defensive growth (healthcare and parts of technology) and bond proxies (property, utilities, telecommunications, infrastructure and consumer staples).

Banks typically rally when the bonds sell-off through the reflation phase. This is particularly evident in the US and Europe and in this cycle, the Australian banks have danced to the same tune. In prior reflation episodes where the bonds reversed, the banks started underperforming. 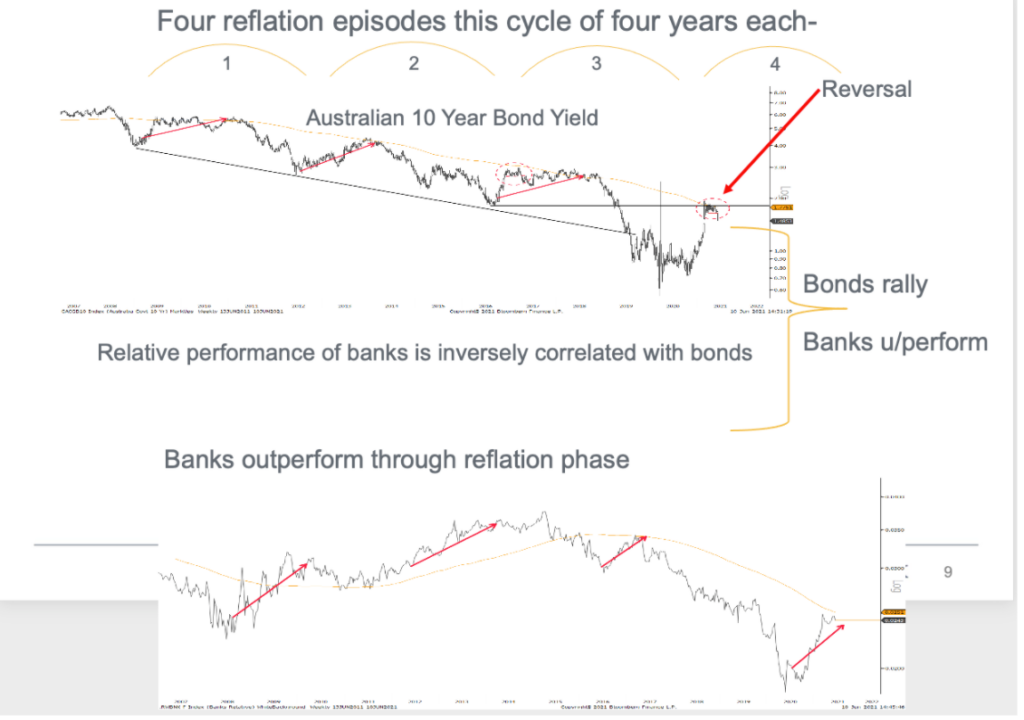 The relationship between the performance of sovereign bonds and the banking sector is a global one. Below you can see the US banks have broken down and will likely underperform in the months ahead. The European and Australian banks have also started underperforming their respective indexes, but haven’t yet broken their advance from Q4 last year, that is likely the next step if bonds keep rallying. 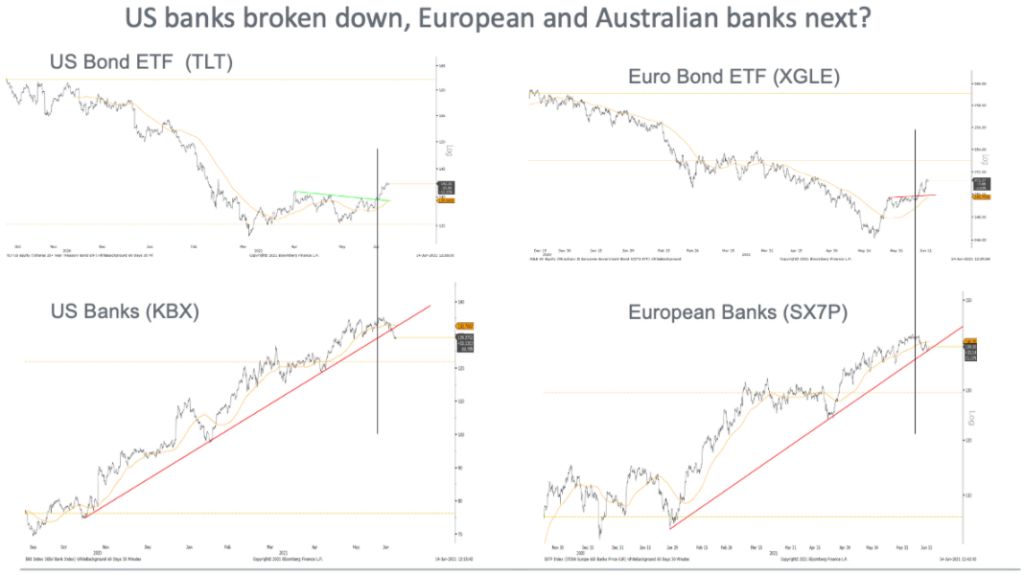 While we have seen a strong signal from bond markets, and this is playing out in the relative performance of bank shares and bond proxies which are started to outperform. Investors haven’t quite got their head around the currency view yet and to be fair the US dollar has not definitively turned yet. This will be the next penny to drop. In particular, watch the commodity currencies (AUD, NOK, SEK, CAD) for a breakdown here – they are hanging on for dear life – and if they do crack, the resources sector will also start to underperform. 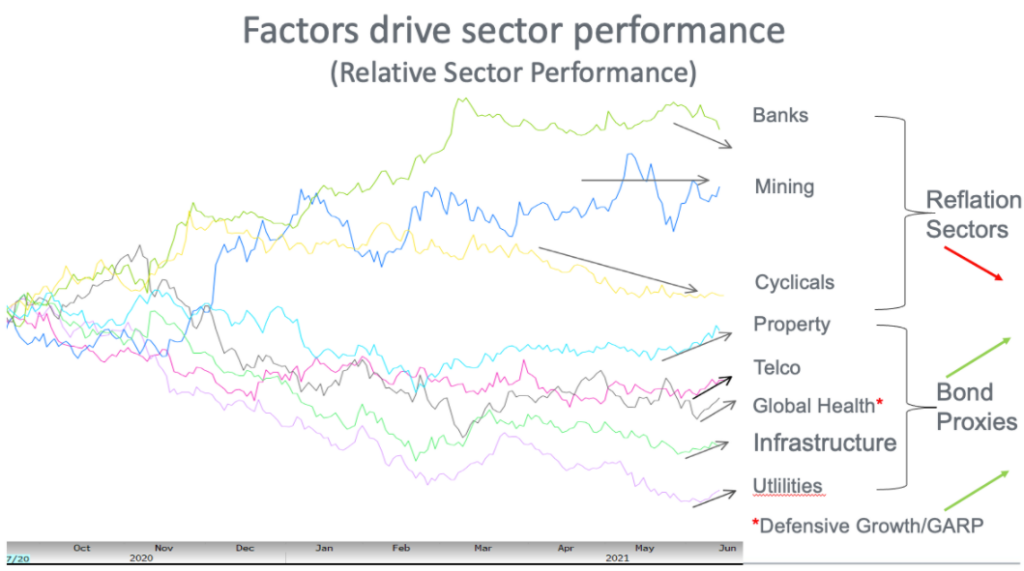 There is a lot of money to come out of the reflation sectors that needs to squeeze into the defensive sectors that have underperformed in the last year. Bond proxies that tend to move with the bonds (REITs, telecom, utilities, infrastructure and consumer staples) and GARP or defensive growth sectors Global Healthcare and parts of Technology.

The price action in these sectors is already confirming this set up as uptrends are challenged in banks, consumer discretionary and resources. Bond proxies have started outperforming in recent weeks, breaking out with the bonds. REITs and healthcare have gone, infrastructure looks ready to launch which is true also for consumer staples. Most if these shares are still well off their pre-COVID highs, allowing for a catch-up rally. It was particularly interesting to see the strength of the move in Property last week, a sector institutions are structurally underweight.

For those “reflationists” out there, don’t fret. The set-up is purely corrective, you might be in for a rough couple of months, as defensive sectors catch up before a return of reflation sunshine in the final quarter of the year. The US dollar again is the key indicator to watch. Any rally will last a quarter or two at best before it resumes its long demise.