A good value investor will buy cyclical stocks on high multiples at the bottom of the cycle. This is when earnings have troughed.  Computershare (CPU) will soon deliver its lowest earnings per share in nearly a decade and this presents that opportunity. But we see FY21 as a trough year and believe this is a pivotal moment for a business with enormous upside exposure to short term interest rates. This makes it a key defence against inflation in a well-constructed portfolio.

CPU’s core operations require it to hold large amounts of cash for its clients. This can be for dividends before they are remitted to shareholders or consideration to be paid to shareholders of an acquired company. Balances have averaged around $16bn worth of USD over the past 5 years. From that $16bn CPU has collected nearly ~$1bn of revenue (Margin Income) over the same time.  Given costs are minimal for management of these balances, it falls nicely to the bottom line, at nearly a 100% profit before tax (PBT) margin. With near zero interest rates globally CPU’s Margin Income earnings have fallen 60% in two years.

In March this year CPU announced the acquisition of Wells Fargo’s Corporate Trust Services (CTS) business. CTS’s core operations are the collection and distribution of funds for trust structures, such as a pool of mortgages. The nature of this business sees it hold large amounts of cash for clients, similarly to CPU. We considered the deal well timed and opportunistic. Firstly, Wells was being penalised by the US regulator due to misconduct issues in its retail bank, this saw it restricted in holding assets on its own balance sheet. Secondly, given the backdrop of near zero interest rates, CPU would be buying CTS at a low point in earnings.

A key outcome of the CTS acquisition is that CPU more than doubled its expected cash balances. With its market leading offering in trust services, CTS holds around $18bn of relevant cash balances. Management is also confident in recapturing another $6bn for CTS, currently managed externally. The transaction will see CPU’s cash base grow at a minimum of 100% and up to 135% if it recaptures external funds (our base case). 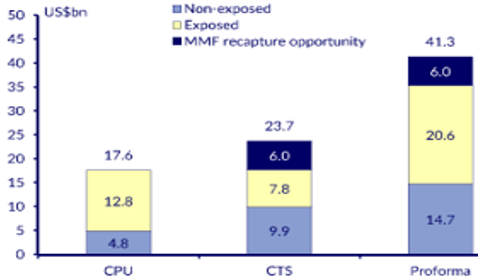 At current interest rates Margin Income earnings on these cash balances is uninspiring. This is due to global central bank intervention currently suppressing short term rates to stimulate growth. With rates artificially low and record stimulus injected into the economy, concerns are beginning to emerge on inflation. Inflation in the US is now set to reach more than 5%, the first time it has done so in 25 years. The strongest lever central banks have to pull against inflation are changes to cash rate targets. In the chart above, we highlight where we are today on the short-term rates journey, with future rates based on market expectations. 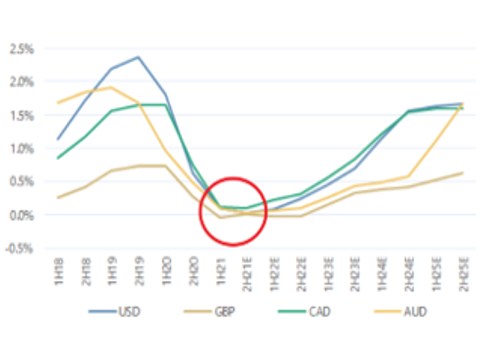 In our base case, CPU successfully gains the additional $6bn of balances externally managed. This sees its base cash balances in FY22 increase 135%.

Computershare may be a boring business, but it holds significant upside potential. As inflation expectations continue to rise, we see CPU as a key beneficiary of short-term interest rates. We also consider our best position to protect a portfolio against any runaway inflation.